The Power of Prayer

As a family, we believe in the power of prayer and have seen the results of praying first-hand. We are thankful and grateful for all the prayers lifted up in our name along with many answered prayers but I wanted to share with you about how the power of prayer has changed one man’s life here in Moldova. His name is Alex and he lives in the village of Bransesti located in the eastern region of Moldova. I always say everyone has a story but Alexi story is different, his story is the result of the power of prayer. Some may remember him from previous social media posts and or emails but I have never written a blog about him. I felt it best to write his story now and feel as thou his story will be an encouragement to many who are struggling now with health issues, relationship difficulties or spiritual warfare for God will answer our prayers.

I first met Alex is November 2015, I thought there was no hope for Alex but many people began to pray specifically for him. He lives in the village of Branesti where he grew up. His mother died when he was a teenager resulting in both him and his father turning to alcohol as a source of relief from the pain and poverty. The death of his mother became a pivotal point in Alex’s life going forward. Some years later Alex was beaten which almost caused him to die and he lost the use of his legs. He has been confined to a wheelchair since this and he began to drink heavily. In September 2016 while visiting with Alex he prayed and repented of his sins. This was the first time I had seen Alex smile. He said he felt a heart change but could not put down the bottle. We would take him food parcels and he would trade the food for wine. We continued to pray for him and asked many others to join us in prayer for him. With the help of the local church and OM in early 2017, Alex was able to go to a 6-month rehab program. Through this program, he confirmed his salvation and his body was cleaned from alcohol. He returned to Bransesti changed and had a new outlook on life. Many people in the village said it would not last. They were wrong, Alex began making the journey to the church every day in his wheelchair then climbing the church steps on his fists, asking what he needed to do to be baptized and what he could do at the church. He was given the requirements to be baptized and he began working on them.

In the spring of 2018, he asked for a single burner stove so he could prepare his own food on Saturday and Sunday, he receives a hot meal Monday thru Friday from the Elderly Center. Wanting to prepare his own food was a big step for Alex. In April 2018 I took him the single burner he requested and someone provided the gas bottle to cook with. Now he cooks every weekend and gives extra food to his needy neighbors. People still were praying. Alex completed the requirements for baptism was he was baptized on July 1st, 2018, he has become heavily involved in the church and is now the Sunday school teacher for the children at the church. 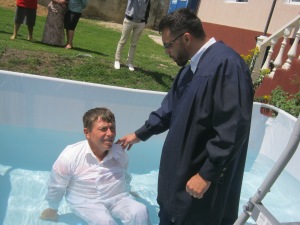 He helps anyone he can in Branesti. Alex’s story and salvation is a result of faith and prayer. People continued to pray, in late 2018 another prayer was answered, we had been working for the past two years to prepare all of Alex’s documents so he could get a passport. Once he has his passport he can receive a pension each month. He received his passport on December 7th and will begin receiving a pension soon. Our GOD is faithful and Alex is living proof of this. Please continue to pray with me for Alex

As I close this entry I cannot help but think about another example of the power of prayer. In October 2018, Branesti held its annual harvest market, at the close of the market the people of the village wanted to help someone in the village. The people asked the mayor and the pastor who could they help.  Alex’s name was raised and the people of the village gave enough money to Alex for a new window and door at his house. The Lord changed one man’s life and now the entire village is changing, never doubt the power of prayer.

Currently, Alex is living in Branesti and he is heavily involved in the local church. We are searching for a place he can go for rehab because the doctors say he can walk again but finding this place has been a struggle. I know the Lord will provide an answer to this prayer too. Most rehab centers here in Moldova do not offer the extra care Alex will need in the beginning so I ask you to pray the Lord opens the door to a center that will help. In the meantime pray for the village of Bransesti this summer, Alex will help with a day camp throughout the summer for the children of the village and church. Lastly, Alex is getting around somewhat better he has been provided with an electric wheelchair, this makes travels to and from the church each day better, this is an answered prayer.

I ask you to take a few minutes, click on the following link, and watch this video about prayer and its importance (The Power of Prayer). This video is several years old but listen to the words, I think all problems we encounter in life is mentioned in this video, God listens to all our prayers equally. For there is power in prayer and there are many more Alex stories out there that were the result of prayer. God wants to do amazing things for us but we must ask in prayer and then believe. If you have a God story anwered through prayer please feel free to write to me, I would love to hear your story for I will be encouraged. Thanks for your time and prayers especially for Alex, I pray now that you and your family will be blessed. Remember pray, believe and receive.

Category: From Our Blog, Moldova, Our Life, Words from the Heart      Tags: Believe, faith, life, Moldova, Power of Prayer, prayer

← Reality and The Culture We Live In
Mrs. Vera →