While on Love Moldova B we went to the village of Nicolaevca. Nicolaevca has a small church, that has been planted from the church in the next village. It is a small house with two rooms that are very dirty and smelled of mold. Work to reconstruct the house is underway but has a lot to be done. There is a need for the church in the village because the people are open to the Gospel and want to learn more about God.

Our team spent five days in this village doing children’s program and family visits. At the children’s program, I met a boy named Maxim. He came to the children’s program every day and we became friends.  We played together every day. On the fourth day, we went to his house for a home visit. His father and mother live at home along with his grandmother. His father works in the fields and his Mother works on Sundays. So this is a positive thing that he has both parents at home and they both work. However, it doesn’t make Maxim’s life any better. His parents are not believers. So they don’t attend the evangelical Church because his Mom works on Sundays. Sometimes his mother goes to the Orthodox Church. 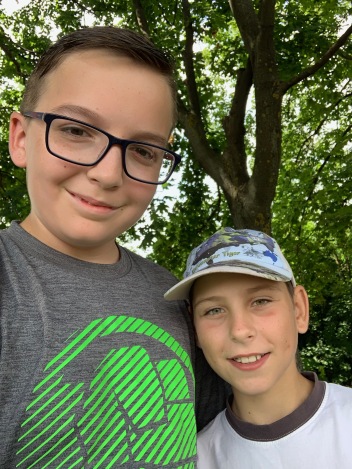 Maxim is twelve, so that means I am only 3 years older than he is. When I look at our lives side by side there are many differences. The one that stands out the most is the amount of “stuff” we have. I have a room filled with many nice toys, and he doesn’t even have a room for himself. He asked me to play with him at his house and we played cars. He had a pile of sand, a fork, a spoon, and three small cars. These were all the toys he had to play with. We sat in the sand together for 45 minutes while our parents talked. We made roads in the sand and drove those cars around, we didn’t need anything else we had his toys and each other. While playing in the sand I realized that I could share God’s love with Maxim and other kids just by being friends and playing with them.

My command is this: Love each other as I have loved you. John 15:12 NIV

We had so much fun, Maxim doesn’t have many material objects, but he has so much joy and he is so happy. I am trusting God to watch over Maxim and his family. I am praying that he and his family will come to know God. I think we planted seeds in him and his family while we were on this outreach. Please pray for him with me.

← A Life Focused on Him
What Will Be Your Choice? →