For me, the first place I would call home was an old single-wide trailer on Jackson Highway in my home town. I was a baby of course and do not remember much about the place but I know for a period of time this was home, my refuge. A few years passed and my family moved closer to the city of Covington in a small but perfect three-bedroom house. I have many memories about this house for a few years this was home, my refuge. This house was across the street from Christy’s grandparents’ house where I first met her forty years ago.  I remember how big the back yard was, but if you drive by the house today you can see, the yard was not that big. I was looking through a different set of eyes, as a child, you see everything in a different perception. We were living in that house during the ice storm of 83’, no school for a week and basically everything was shut down but I still had a place to call home. A few years passed and my parents built a house out in the county where there seemed to be more cows than people. This was all new to me but that house became my refuge. There I meet many new friends and the times we had together are still imbedded in childhood memories. From time to time I catch myself sharing and telling Michael and Mary stories from growing up in the house. Just up the street lived my uncle, aunt, and cousin and there I would spend time too. I remember one winter my uncle and my dad thought it would be a good idea to buy a tractor-trailer of uncut timber for firewood, looking back now I don’t think they would ever do that again. We had firewood that winter but I think they cut wood every day. Thinking back now there were several places I would call my refuge while we lived there. Just a place you could go where you felt safe, protected, maybe even a secret place no now knew about. We had a dog named Charlie, raised some rabbits for a school project, had many adventures through the woods, played ball in the street until the security lights came on and you heard your mamma calling you to come home. I guess you could say all of it was my refuge, the house, my family, my friends, the forest, etc. But something was missing and I was not sure what it was.

Several years had passed while living at that house and I was now in my early teens, I had found what was missing, I repented and accepted Christ as my savior. I understood and believed in my salvation but never knew how much I would depend on it and Him as my next season of life began.  A short time later the idea of a home or refuge was turned upside down and I found myself confused, embarrassed and even some days felt at fault for all that was happening. My parents separated and were in the process of divorce but I knew one thing for sure I found my refuge in God. This was a hard time and it seemed it may never come to an end. Then one day it was all final and finished, Mom and I moved to a new apartment. Life continued, it was during this time that I realized my refuge should be God for He is my rock and places of worldly refuge would not last.

The Lord is my rock, my fortress and my deliverer;

my God is my rock, in whom I take refuge, my shield

and the horn of my salvation, my stronghold.

I write all of this to ask, where do you find your refuge? I began thinking about this and Psalms 18:2 while we were in the village of Nicolaevca for Love Moldova B outreach. Each day while we were in the village we presented a program to the children, even on Sunday. The program was held at the same place every day, a beautiful ridge up above the village where there was a cleared area for a soccer field. As we traveled this old road that was barley passable each day I thought more and more about this place. It was a place of refuge and the children of the village held this place close to their heart. It was a place where they could just grow up and be kids, do kids’ stuff but at the same time know they were safe and protected. The distance you needed to walk to this place was far away from most of the kid’s homes. Kids in the west would never go the distance but these kids would have walked twice as far for this is where they could come to get away from danger, drunk and loud parents, or even someone who might beat them. With each passing day, you could see it in their eyes so much that I began to feel the same, this place was a place of refuge.

These children had impacted us so much in a short period of time. Every day as we arrived at the field they would be waiting, some 40-50 of them and many parents too. They would be sitting calmly over in the edge of the trees where it was cooler patiently waiting for us to unload the Sprinter for the program. We would take out the balls, the parachute and sports equipment watching them run to us as if they were trying to win a race. This nearly breaks my heart every time, you find this in most villages there are no balls, jump ropes, frisbees, etc. nothing to play with. The program started every day like this, but each day more children came. We would start with free time, then team games, then after 30-45 minutes we would bring them together with an attention game to settled them down before the main program began. The game was followed by a couple of songs with motions much like a VBS song. After the song came the clowns, who presented a skit that was funny but also had a serious meaning to tied into the Bible story they would hear. The skit was followed by the daily Bible verse reading, it always amazes me in a children’s program, how quickly the children learn the verse and want to share what they have learned. The word of God is being instilled in their hearts through these activities. After the verse comes the Bible story in which our team acted out the story keeping the children’s attention at the highest. When the story was finished the team came together and prayed over the children and their parents. The program ended each day with the children completing a handcraft that went along with that day’s theme. Then we would give each of them some bread, fruit, and juice as they were leaving. As they walked they would turn to look at us almost as if they wondered if we would return tomorrow. You could also see the expressions on their faces knowing that their place of refuge was over for today and it was back to reality. 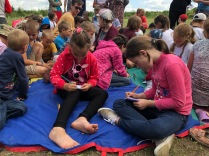 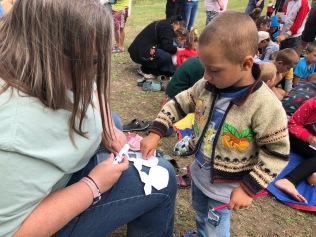 Each afternoon the team would go into the village to make some family visits.  We would see some of the children along the village streets and they would smile and some would even wave. We visited some of them to see their family and take them a food parcel. In their homes, it was a different atmosphere they were not as relaxed and open to talk or listen to what we had to say. The Lord was up on that hill and I felt as close to home as I ever felt.

Goodbyes are always hard when you leave the village. It is truly amazing to see God work in your life so fast but knowing you are only there for a few days is tough. You begin to wonder how will God really use you in that period of time. We have to be prayed up and seek Him for our refuge so we will feel peace when we are doing ministry in the village.  Then God will bless you through the children, their families, and other team members, we must turn to Him, make Him our stronghold, our rock, and our refuge. He wants this and His arms are wide open for us to run to Him. I pray you find refuge in Him and not worldly materials for they will not last nor bring you happiness. I also ask you to pray for the children of Nicolaevca, for seeds that were planted to grow so that they realize God is their refuge and no matter what happens, with Him, they are safe just like they felt with us up on that old hill.